Are Women More Violent Than Men and Do They Get Away With It? – Join the Discussion

In the month of October, Domestic Violence Awareness Month, many people show their support for ending domestic violence. Coincidentally, I had the opportunity to face some feelings about forgiveness and walking in love by writing an open letter to my brother.

You May Also Like: My Open Letter To My Big Brother

Sibling Abuse is a form of abuse that is usually not talked about at all, especially overshadowed by individuals who are in romantic relationships experiencing domestic violence. 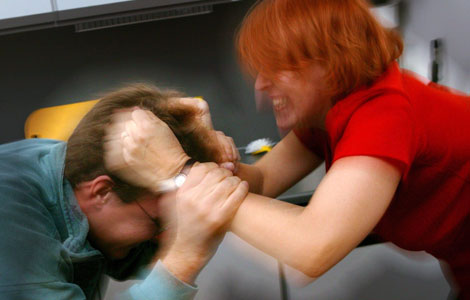 As a woman, if you ask me if I believe in the Violence Against Women’s Act, my first answer is yes, absolutely. After educating myself on the subject, I’ve learned that it was taken before Congress this year again because they wanted to add immigrants and other communities to the list of women who could receive services as victims of domestic violence.

In reading the intricate details about the act, my question was, “What about men who have been domestically abused?” Domestic Violence Awareness Month always has its concentration on violence against women and to an obvious degree, rightfully so. We have less physical strength in most cases, but as I pointed out in blogs that addressed Rihanna and Chris Brown, and Whitney and Bobby Brown, there was domestic violence that took place from both individuals involved.

Unhealthy cannot be limited to physical wounds. There is an emotional response when we see physical wounds, but psychological, verbal and emotional abuse leave scars that we can not see. There are also couples who go toe-to-toe, mutually battling it out. And lastly there are couples who the woman is the aggressor and the man may respond either by hitting her back or restraining her.

Should the bus driver get his job back?

I do not agree with domestic violence no matter who is the aggressor but I have to say that there was a video on WorldStarHipHop.com that completely disturbed me this week.

On this video, you clearly here this woman screaming at the bus driver, calling him names including “Fat Stankin’ Ass”, and “Bitch”. She is threatening to spit on him, and began threatening his family.

The bus driver told her to stand behind the yellow lines, at one point it sounds like he’s telling her to get off of the bus. She is absolutely verbally abusive, taunting him and provoking him to fight while he is doing his job, driving the bus.

To my surprise the woman who is in this video is 25 years old! Her name is Shidea Lane. After pushing him WHILE HE WAS OPERATING A METROBUS called the RTA, he responded with an Upper Cut that looked like he was a professional boxer in a former career.

You have heard the transition of the bus riders who were talking about her horribly and although shocked, did not change their tone when she hit him. You can then visibly see the reaction of the bus riders when the bus driver stopped the bus in order to hit her back and physically remove her from the bus. The woman jumped back on the bus, and continued trying to fight the man.

The man was arrested, the woman was not? In a post interview with a Cleveland News station the woman tried to say that she wanted to talk to a lawyer. She did not confess to hitting him. My confusion is why people called the police on the bus driver?

There were several people on cell phones video taping this situation. I have seen it from several angles, with the same words heard in the background. Of course some views are better than others but what was clear to me was how she antagonized a 59-year-old man who had been working his job for 22 years and may lose it all because the law discriminates against men who experience violence from women.

Just to be clear. I would be livid if this were my father, husband or brother. He has no criminal record and no prior problems. Quite frankly, his past should not matter in this case because of the video tape.

He asked this woman to stop, step behind the line, leave the bus. I think the public should be more educated about how to handle situations like this. Someone could have easily called the police on this woman far before the man hit her in response to her attack. If she were a man, provoking and threatening a female bus driver, they would have called the police.

Shidea Lane should be picked up for threats and assault. I believe that at this point, they have both been charged. According to MemphisRap.com “While Lane is accused of choking and spitting on Hughes before he responded with an uppercut, only disorderly conduct charges have been filed against Shidea Lane, apparently because her alleged actions were not seen in view on the video of the incident. ”

In her video with the News Reporter, she said that she was changed.

Well, I’d be changed to if I were used to showing absolutely no respect for myself, elders or others around me, and having my chin checked, and body rocked with a Mortal Combat upper-cut “R-You-Kin”.

This case may not be classified as domestic violence or abuse because there is no romantic relationship however this happens everyday in this case and cases like it, and at home where men are dodging bats, knives, and other objects due to angry women.

My daughter who is sixteen knows a young lady who is psychologically and verbally abused by her mother. Her mother is physically and verbally abusive to the husband. The child relayed this message. It happens. Stop calling the women crazy and assuming that the anger is not overpowering the brawn of a man. It is still wrong, hurtful and abuse! Words and fists do hurt regardless of who is throwing them.

What do you think? Should the bus driver go back to work? Should Shidea Lane be prosecuted for attacking a bus driver? Do men experience domestic violence?

2 Responses to Are Women More Violent Than Men and Do They Get Away With It? – Join the Discussion