Sex Education: Is it grooming children for child sexual abuse?

Posted on April 5, 2013 by Ressurrection

Many people would say that Planned Parenthood and the National Education Association have had a tremendously positive impact on society, backing the push for sexual health education within school systems across the country.

Class is in Session!

It is believed by many that since children are already engaging in sex we need to ensure that they have contraception to prevent pregnancies, and a real understanding of sexually transmitted infections. On the other hand, many believe that teaching sex education in school could mean an increase in promiscuity and that this teaching is a form of child sexual abuse grooming.

In this country, there are aggressive efforts by well-educated doctors, lawyers, judges and others who identify themselves as a member of the homosexual-pedophile or pedophile communities who want to change the definition of pedophilia from a mental illness to a sexual orientation. The same was done in 1973 when the definition of homosexuality was changed to a sexual orientation based on the book, often referred to as the Kinsey Report.

Alfred Kinsey was a homosexual-pedophile who molested and raped along with his co-conspirators, thousands of children in the name of science. They were testing how many times a child would orgasm. The children were sodomized with and without objects, and were used as experiments.

Dr. Judith Reisman has spent a greater part of her life studying Dr. Alfred Kinsey’s work and his impact on the entire world. My book, Sexual Discipleship: Exposing the Strategic Plan to Legalize Sex with Children will not be redundant in its efforts to reveal the work of Alfred Kinsey however, I will speak from a biblical perspective citing historical beliefs, that have influenced science and Satanists alike who have discipled Kinsey, and who were also discipled by Kinsey.

In short, the founder of the National Civil Liberties Bureau, now named American Civil Liberties Union Morris Ernst, who was appointed by President Harry Truman to the President’s Committee on Civil Rights said about Kinsey’s work:

It is the single greatest contribution of science in my lifetime, more than the brandeis brief.

According to Wikipedia, The Brandeis Brief was a pioneering legal brief that was the first in United States legal history to rely more on a compilation of scientific information and social science than on legal citations.

The ACLU is responsible for working to remove the term “Under God”, and they are against corporate prayer in schools as they call this “government-funded religion”. This is incorrect. The government can not fund something that is free.

Students don’t necessarily have to pray out loud rather a generalized prayer of peace, thanksgiving and overall freedom of expression through the closing of prayer would make a huge difference. It would calm the environment and invite resolution, connection and renewal. I believe it would reduce both bullying and violence.

If you read the ACLU website, you’ll also learn that they are lukewarm; neutral. They will defend the removal of words that include God, and they’ll defend the use of the word God. It is all confusing but here is the conclusion: The ACLU, like Kinsey is for everything. In other words, everything goes, and the idea that we live in a society where everything should be acceptable is how they defend two sides of both coins.

The ACLU  and Planned Parenthood were founded on the principles of a homosexual pedophile who falsified his interviews with criminals by saying that they were the average white woman. It gave the impression that America was engaging in sexually free activities that they were not.

Planned Parenthood has a similar foundation in that Alan Guttmacher who worked with planned parenthood and started his own similar institute was a Kinsey follower alongside his twin brother who said that Kinsey’s data was the boat by which they were steered.

Many of the top organization who support the idea of free sex, sexual health, the entertainment industry who promote adult-child sex, on-screen love scenes with children and other subliminal messages read and live by Alfred Kinsey’s book.

The Kinsey Institute was established through Indiana University who supported Kinsey during his days in the lab molesting and raping children. Today, this Institute has admitted that they are in possession of child pornography, and journal submissions by pedophiles who intend to continue to submit their crimes for scientific research.

I have created a petition entitled Make Child Sexual Abuse Grooming A Felony in order to allow prosecution of offenders for pre-meditated sexual abuse, as I call it. The grooming process is something that happens to many of the 90% of children who are sexually abused by someone whom they know.

Erin Merryn created a petition online, and has made it her life’s work to include child sexual abuse education as a law in every state. While I am supportive of her healing process and her sense of desire to make sure that children have knowledge about sexual abuse, as a grooming expert and one who studies pedophiles I do not understand how this will help children. I fear that it will only help pedophiles.

You May Also Like: Make Child Sexual Abuse Grooming A Felony

I learned Good Touch, Bad Touch in Virginia schools. Erin Merryn learned Stranger Danger, but most children are sexually abused before they enter Kindergarten. If the focus of her campaign is intervention, then I completely understand how sharing this information we hope, could reduce the number of children who are abused for years.

On the other hand, if child sexual abuse is legalized, and the definitions of pedophilia are changed from identifying it as a mental illness to a sexual orientation like homosexuality, that means that a pedophile could be teaching your child in this child sexual abuse education class, likely applying grooming techniques and making the children vulnerable for abuse. He’ll handpick who will not tell, and if it is legalized he’ll only suffer mild scorn if any because he will not be prosecuted. Is this the world we want to live in?

We would not need sex education in schools if we understood that Kinsey’s research greatly affected the promotion of both pornography, homosexuality and free sex agendas by homosexual-pedophiles who desire to normalize first homosexuality, and pedophilia now, in this generation.

Every school system, agenda and teacher are different. My daughter complained that her Spanish teacher would put his political beliefs on students and argue (not debate) calling them names in the classroom if they were republican. The same teacher was nicknamed as a “pedophile” by students who, unlikely knew what this meant. When I reported it to the school, nothing happened even though I told them that the fact that he was nicknamed this by all of his classes should be cause for alarm.

The truth is, teachers have the ability to do and say what they want in classrooms where children do not realize that they may be experiencing grooming. So, why is sex education grooming children for sexual abuse?

You May Also Like: Why Child Sexual Abuse Grooming Should Be A Felony

Sex does not need to be a community conversation. In the classroom, children are often in the room with children that they like, dislike, are bullied by or have other unsettling feelings about.

The same confusing type of feelings that can come up in this environment where people say that it is okay for sex to be discussed, is a similar type of anxiety that may come up when the child is being manipulated, and coerced (a part of the grooming process) by an adult.

If you tell the child that it’s okay to feel this way, it reinforces the grooming process and it does not call them to respond to the trigger of discomfort that they feel in a situation where they may be in danger. 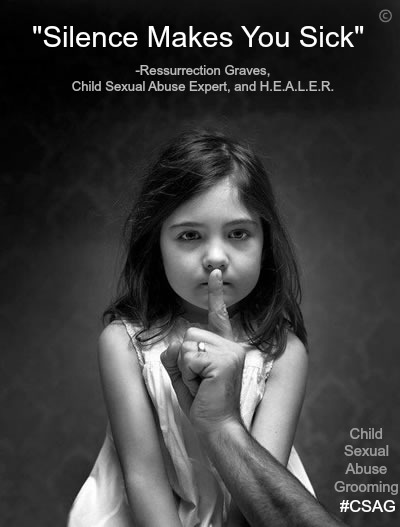 The easy argument is that parents are not talking about sex at home, and this may be true. I do not believe it is the responsibility of a teacher to do the honors, especially when the teacher may be teaching from their own personal experience. Yes, there is curriculum but not every teacher will follow them. I have never been to school where history was taught the same way.

Most professionals are concerned that they can reduce the sexually transmitted infections data, and pregnancy statistics if sexual health is taught in school. The statistics pre-Kinsey and post-Kinsey are alarming. There has been no reduction in violence, std’s or pregnancies since his report was widely spread and adopted as normalize sexual behavior.

By the Federal Bureau of Investigation’s definition of grooming, sex education in schools promote the grooming process in the classroom. Here are a few things to remember:

From a parent perspective, when I talk to my child who is 16 about her value system, I have always made it a point to talk about how her spirit, soul and body will respond to advances from peers wanting to have sex with her, or adults who may be seeking to groom her for sexual abuse. I have also talked to her about the feelings of desire or confusion that may result from certain advances.

While I understand that many children are sexually active, I believe that instead of teaching them how to protect themselves while having sex, we can teach them about their personal value, what healthy relationships are, and look like, and we can teach them that while sex is beautiful, it is not something that a child can consent to, and why.

You May Also Like: Make Child Sexual Abuse Grooming A Felony

Neuroscientists have confirmed that children are unable to make rational decisions without risk until the age of about 24 years old. If this be true, it seems counterproductive to teach children about sex in detail, in a way that may break down inhibitions, entice them into further questioning, position them from abuse, or outright groom them for a sexual predator.

Before Planned Parenthood and many of the other changes which have resulted in less faith-based identity and the promotion of free sex for all, including children, we had less cases of violence, abuse and teenage pregnancy.

I do not agree with the shame associated with teen pregnancy like being forced to give your child away, but I do believe that the pre-Kinsey laws supported an environment that did not create a rape culture, or a “sexual revolution” that has left a $124 Billion dollar health care epidemic. Please help me to Make Child Sexual Abuse A Felony

Ressurrection Graves is a child sexual abuse grooming expert who has authored a petition to make it a felony. She writes, speaks and educates the masses on protecting children and healing as adults from past child sexual abuse.