Joel Osteen Hoax: Why This Rumor Seems to be Believable

Posted on April 8, 2013 by Ressurrection

Joel Osteen was the victim of an internet hoax. I see how easily people can be swayed. A 12-year-member of his church even called for him to be prayed for assuming that the rumor was true writing this:

“We’ll pray for him. He’s come under the influence of the Devil,’ said Margaret Samson”

I would have at least waited for a word from God, a statement from the man or something. In fact on other people’s Facebook pages, I responded in comments telling people to wait for a real statement from him. Instead the negative comments appeared locked and loaded long before they were aware of the hoax. In my status I said this:

Just so that we are clear IF Joel Osteen denounces Christ, it should not move you. Many of you have dogged him for years because he wasn’t deep enough, and even I admit I don’t get much from hearing him smile and speak but I’m sure someone does. Here is the bottom line: If you know God for yourself, your core belief system should not be shaken. Move on. Keep living for God because guess what? Joel Osteen is a pastor and he has a price to pay IF he is misleading you. You on the other hand, have a responsibility not to make him your God. Look Up. Look In (your bible). Good night.

I have no negative thoughts about Joel Osteen, I’m just more of a Joyce Meyer kind of woman. She speaks the truth sometimes with a bit of an edge. Her teaching is not for everyone and quite frankly neither is mine. We are all called to specific people. We see illustrations of that in the word of God.

I’m troubled however by the freedom in this country to kill people, and injure an entire body of people who may not be aware of hoaxes that are formed. I do not understand how a hoax may be protected under free speech and I believe that greater penalties must be given for those who intentionally start twitter deaths, fake websites using brand-like url’s providing false information.

I thought that was called defamation of character: To knowingly create and disseminate fabricated stories in order to harm another person’s life, brand or character? What would happen if someone had committed suicide because of this?

The reality is that we are all in different places spiritually, and for a leader such as Osteen to quit his ministry and create his own would be uprooting (also called raping) a stretch of plants in the ground removing them from their foundation. It has been said that a person’s spiritual foundation is the core of who he or she is, and I believe that the person who did this should be found and held accountable legally. Is this a hate crime?

The rumor seems believable because Joel Osteen has been said to not quote the bible in his television ministry. I do not know how he preaches, but I do know that Israel Houghton has been his minister of music for a while and I’ve seen him in person several times. I don’t understand how it’s possible for Israel to create such an atmosphere for Joel to give analogies and funny stories the entire time he ministers.

People often question his ability to teach the word because it appears that he does not but remember what I said as I began this article. We are all called to a specific people. Some people are called to the poor, some are called to the rich. There are some people who may not be able to receive from a Joyce Meyers or someone like me, hence Joel Osteen.

A man made a comment that sparked this article. He said:

No one else is mentioning this so I will:

I have tried to watch Joel Osteen before because at a party a few people were speaking well of him.

I couldn’t even force myself to watch more than about five minutes of this guy. I couldn’t stomach his phony demeanor.
Then I read about him and how with no credentials he took over his fathers ministries, and was able to get lots of unsuspecting people to give him loads of money.
I always wondered, don’t the people that send him money watch him?
I would send him a dime. I can’t believe people are so naive as to send him their hard earned money.
I think it is fitting that a trick was pulled on him, I hope it cost him a bazillion banana’s.

His name was John Tod, at least this was his online user name. He sounds ignorant to me on many levels. I want to respond to it because I think it is important. In observing Joel, watching very old videos of him until now, I don’t believe he or his wife are phony. You can’t keep this up for 20 years. He is Mr. Nice Guy. We’ve all met one in high school. I had a librarian like him. I always wanted to be this nice. Maybe if he weren’t a pastor he’d be a librarian, and smile.

The people who send him money do watch him. This comment was lacking legitimacy. They watch and apparently the population of people who he has helped to learn about Jesus Christ are moved by his floating on air approach. Some people apparently don’t like it rough.

I don’t understand how people become naive because you aren’t controlling their spending budget. People send him money because they want to sew seed into his ministry. It is not about him and people seem to misunderstand that he has a church who has a board of directors. 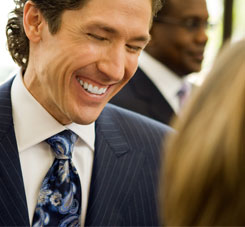 Joel Osteen does not get all of that money. I disagree with the church being connected to the government in this organized, structured way but that is another article. The truth is, we should never send money to man. Your choice to send money for tithes, church or pastor’s offering should be something from you to God. Man in no way becomes your source. People who send him money do so because they want to connect their faith to his anointing. Pastors work diligently in spirit, soul and body for their sheep. Sheep is not a term to be confused with weak or anything derogatory. It is really unfounded for people to expect pastors to be poor, living under a bridge but ministering the gospel so that you won’t.

The other thing I don’t understand about people who have so much to say about ministries is, who told you that a pastor has to be qualified? The only person that qualifies a pastor is God – period. Why are you asking about Osteen’s credentials? You can’t qualify or discredit him. Here’s the good news though – if his teaching doesn’t minister to you, just unfollow him. – Ressurrection Graves

People who really live for God understand that man is not their source, God is! With that said, I’m glad you John, had the opportunity to get all of that off of your chest. You’re not the only one.

Hopefully, this will teach those of you who spoke too soon how not to put your foot in your mouth. We have to watch how we speak about others, as we certainly do not want to be ill spoken of in the same way. Oh yes, and then there’s the scripture which says that we could be entertaining angels unaware. Backbiting is not attractive, on any gender, anywhere, under any circumstances.

Joel and Victoria Osteen have launched “A Night of Hope” which is a tour.

A Night of Hope events last for 2 to 2 1/2 hours and are filled with praise and worship music, encouragment from Victoria Osteen, a special testimony from Dodie Osteen, a prayer time together and an inspiring message from Joel Osteen. There is no intermission, according to their website.

I believe this was an attack on the christian faith and not necessarily Joel Osteen. What say you?